In 2016, a New York Yankee rookie catcher, Gary Sanchez went wild in the short time he was brought up to the big leagues. He was hitting home runs at an incredible pace. In only fifty-three games he hit twenty home runs, which are Ruthian numbers over the course of a full season.        Watching this talented player, it was not his hitting that impressed me. On one play, while he was catching, the opponent had a baserunner on second base, and on the next pitch, Sanchez, for some reason, on his knees, caught the pitch and threw a perfect ball to second base to pick off the baserunner. The play was truly magnificent.

For whatever reason, I have always had an affinity with the catching position. Being a baseball fan my whole life, even as youngster, I found it hard to fathom that the catchers I followed in the late 1950’s and 1960’s at times would catch both games of a double header. Today the starting catcher will very rarely catch a day game after a night game. It is still one of the most challenging positions in sports. I speak to baseball scouts from time to time, both on the professional and the college level. I always ask them the same question: What are you looking for this year? The answer very rarely changes. The priority that most scouts seem to always be looking for are two things: Lefty pitchers and quality catchers. The coaches and manager of professional organizations and college teams seem to always be complaining about the lack of lefty pitchers and    fundamentally sound catchers. As far as the lefty pitcher, it is simple. You are either born a lefty or not born a lefty. As far as catchers, many scouts tell me that a lot of young players just don’t want to put in the work  involved behind the plate day after day. Like in basketball, many young players would rather shoot than play defense or rebound. I always use this basketball example when kids come out to warm up. Usually these days they take a basketball and go beyond the three-point line and begin shooting. If you are involved in youth or school sports, have you ever seen a basketball player come out and want to work on his defense or rebounding? I never have. At the beginning of each year I get all my catchers together and tell them what I expect from them. I give a 5-minute lecture of how being a catcher in baseball is not an easy job and requires constant work for the whole game. The first time I ever witnessed the delayed steal in youth baseball, I was enthralled watching it succeed. I then began to study how the delayed steal was done from beginning to end. In case you are not familiar, the delayed steal occurs with a runner or runners on base, and they try to get to the next base after a pitch on the catcher’s throwback to the pitcher. I observed how this was done and spoke to as many coaches my “senior” I could speak to. One of the most common aspects of the delayed steal I learned was the catcher having some kind of flaw when throwing the ball back to the pitcher. To a man, every one of the most successful coaches I spoke to said the same thing; “Never have your catcher throw from their knees when there are runners on base.” This is very sound advice but in the course of a game or a season, the catcher can tire and slip up sometimes and throw from his knees. A good opposing coach will smell blood. When he sees the catcher do this, he will attempt the delayed steal. No athlete at any age can throw the ball harder from their knees than from a standing position. There are no 11 and 12 Gary Sanchez’s. I instruct my catchers that when there are  players on base, they must stand up after every pitch and throw a line drive back to the pitcher. There is no half way about this. I begin in practices, and during the game, I am constantly yelling instructions when players are on base. And I remind the catcher to stand up and throw the ball back to the pitcher after every pitch! In my book: 44 Baseball Mistakes & Corrections, I try to reinforce the fundamentals to overcome possible mistakes that will give the opposition extra outs that will become extra runs. 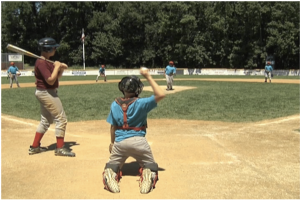 Years ago on my minors team, I had a player named Andy who loved to catch. After the game, his uniform was covered from head to toe with dirt. He loved playing the part of the catcher and was a great listener. He lacked natural talent, but his hustle was incredible. For the age group at the time he was an excellent player. When I explained how to throw the ball back standing up with players on base he did it perfectly. Sometimes you may be better off with a catcher of less talent who understands what is required of him.One more thing about catchers. We baseball coaches are trying to develop baseball players when we should include developing leaders with 10, 11 and 12-year old kids. Part of the problem is that we tend (I’m including myself) to over coach and over lead. We have to show more confidence in these kids as leaders. Catchers are a natural to be leaders, let’s use them that way! 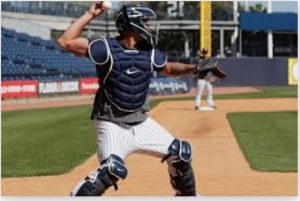