I have some great news for all youth baseball coaches who feel they have a weak team and still want to be competitive. Here it is. Baserunning. Hardly anyone practices this underrated skill. I started paying more attention to it after my first few years of coaching when a rival coach in the minors (9-10 years-old) was using some strategies that really threw me and our team off. I went to this coach’s next few games just to watch the way he coached his team. I started to use some of his techniques and developed them into my own strategies over the years. I learned and created numerous baserunning drills that have become a regular part of my practices. And something amazing happened. I saw that if I practiced baserunning, there was a residual effect. Players as young as 9 or 10 were much more focused on the basepaths. Even between pitches, their heads seemed to wander less than my earlier teams before we practiced baserunning. Too often in youth baseball we see coaches explaining from the coaching box what to do in different baserunning scenarios. It’s all too common to see a coach yelling instructions to a player on second base, such as,

These tips are usually correct, but they are also situations that can very easily be discussed in practice. I tell coaches all the time that having young players experience the situation is much better than just explaining it to them when it occurs on the field. The one baserunning technique that I urge all youth coaches to teach and reinforce is to have their players slide almost all of the time at bases other than first base. Even when there is a close play and the player knows he is going to be out, teach him to slide. The sliding might disrupt the fielders or help break up a double play; something that is not too frequent on the youth level but is fundamentally sound baseball. Teams that have a reputation of opposing team to rush the play and can cause errors on plays that would otherwise have been made. No matter how much you practice this and try to reinforce it, players on the youth level will still forget to slide. I used to get incredibly frustrated when this would happen. I learned it is something coaches have to accept. It is just human nature for 9, 10, 11, and 12 year-old kids to not only forget to slide, but also forget other basics that we keep repeating. Coaches need to remember that their fastest runner is not necessarily the best base runner. Some young players will just gravitate to being aggressive, instinctive base runners. I see this all the time where a player with average speed will just excel at baserunning. Explain and encourage your players to study high school, college, or professional teams and to take a little time to observe the runners that are on base. Encourage them to focus on the runner and not the pitcher or batter to see how they approach baserunning and how they react after each pitch. This is an important point for families that watch a lot of baseball on television. The TV is usually always focused on the pitcher and hitter. When you are at a live game, you get to see the whole field and have the benefit of watching the players on base go from their initial lead to their secondary lead. It is especially good to study this when there is more than one player on base. There are numerous baserunning drills that teams can practice.

One drill I have included in my baserunning video, Baserunning & Bunting Drills  is called “Bounce and Run.” This drill helps condition the players on what to do if they are on either second or third with less than two outs, and a ground ball is hit to the left side of the infield. We want the runner to advance to the next base by first bouncing off the base as the ball is hit and then running when the fielder releases the ball. The drill is set up like this: The players (as base runners) line up at second. I have a shortstop and third baseman and have a coach play first base. Another coach stands at home plate and hits a ground ball to either the shortstop or third baseman. The runner at second will bounce off the base and, once the fielder lets go of the ball on his throw to first, puts his head down and sprints to third. The next base runner in line starts again at second. The player who is now on third will also be the runner on the next ground ball. The player who is on third runs home before returning back to the end of the line at second. Here are a couple of teaching points and things to remember. Teach the base runners that if they are on second and the ground ball is hit to third, they can bounce off further than a ball hit to the shortstop. The same thing goes for the runner at third. If the ball is hit to shortstop they can bounce off further than if it was hit to the third baseman. Another teaching point is that in games the base runner at third should always slide when he runs home. There should not even be a question about it. Also, in this drill, have a signal with the fielders, like scratching your head, which signals the fielder to fake the throw and catch the runner off the base. This is very effective. The base runners learn from this, especially if they are tagged out. I highly recommend that youth coaches spend time going over baserunning.

1. Coaches should put aside 10-15 minutes of every practice to go over a different aspect of baserunning.

2. Make it a habit for every base runner to aggressively bounce off the base on each pitch.

3. Allow even the slowest player on the team the opportunity to steal a base in a game.

4. Teach players to read the pitch or follow it on its flight home when on base to anticipate possible wild throws or passed balls to advance a base. Also, teach the runner to follow the path of the baseball when the catcher throws it back to the pitcher.

5. Players should always slide into the base (except first) on a

steal, force play, close play, or a play at home because it is sound fundamental baseball and sliding may help create defensive blunders.

6. Encourage your players to watch the base runners carefully when at baseball games of a higher level. Point out how players touch the base and make turns on extra base hits or going from first to third or second to home. Show them the difference between a regular lead and secondary lead.

Baserunning is a part of baseball that does not get a lot of attention in practice. The best baserunning teams are those that drill their players in practice. Drill your team in baserunning and you will actually see how it can become your tenth man on the team. You will be happy with the benefits. 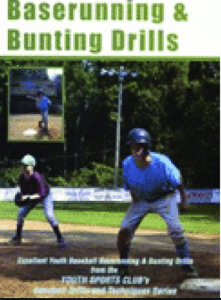 These videos is free at your local library thru Hoopla & Kanopy