I have always been a big proponent of bunting, and feel it can be taught at a young age. When you think about it, a bunt single or a long line drive single hit to the outfield looks the exact same in the box score. Some parents ask me what age should coaches or parents teach players how to bunt? In my twenty-five years coaching youth baseball, I have found there is no exact moment you teach players to bunt. But I always love exposing young players to the different skills in baseball. Some players will gravitate toward bunting even at a really young age. I guess if you pressed me for an exact number I would say about eight years-old. I know that some youth baseball divisions below ten years-old don’t allow bunting. This is no real reason not to go over this skill in practice, even if coaches save it for the end of the season.

There are two types of bunting techniques I recommend to young players. The first is the pivot bunt where the batter just turns his body using the front of both feet to pivot on. While the batter moves his feet, he is also moving his hand on the bat, sliding the top hand to just below the “sweet spot” of the bat. This concept is hard for a few young players. I have found that an excellent way to get the concept of the pivot bunt is to first teach it in a gym and have the kids wear only socks on their feet. The pivoting is easier with socks on a gym floor and the players will really get a good grasp of this concept. When the batter moves his top hand into the correct location on the bat, it is important to teach the players it should be with three fingers, the thumb, index, and middle finger. The fingers should remain mostly behind the bat. Many young players wrap their whole wrist around the bat. If they do this, they can break some fingers if the ball hits them. The three fingers holding the top part of the bat should do so loosely. Many coaches will teach that the bat itself should be level. I like to teach the batter to keep the fat part of the bat a little higher than the knob. If the knob is higher than the rest of the bat, upon contact, the ball almost 100% of the time will go foul behind the catcher. I have found that when teaching young players to keep the bat level, they have a tendency to lower the fat part of the bat as the pitch comes in. So I teach to keep the fat part a little higher than the knob.

I also teach my players to imagine a large glass plate in front of home plate. They cannot push their bat forward to make contact and crack the imaginary glass. The bunter must wait for the ball and almost try to catch the ball with the bat.

The other type of bunting technique is the square bunt. On the square bunt, the player actually lifts his feet so his toes and shoulders are square to the pitcher. His feet should be about shoulder length apart. My preference is to teach the pivot bunt because the players just pivot on the front of their feet and do not have to lift their feet. Once in a playoff game, I had a player perform a square bunt, and he put down a perfect bunt, and beat it out...we all thought. The only problem was, when he lifted his leg and put it down in a different position, it was right on home plate and he was called out.

Make sure you emphasize to your young players that when they are given the sign to bunt, they should only bunt at a hittable ball. Many youth players think they have to bunt at the next pitch no matter what. Many times they are bunting at a ball way out of the strike zone because they got the sign to bunt. Coaches should also explain on a low strike that the batter has to bend his knees. Many times on low strikes the batter will point the barrel of the bat down to bunt the ball. When the player does this he has no chance of bunting the ball fair.

There are plenty of other bunting tips. If the batter knows he is going to bunt he should always position himself in the front part of the batter’s box. This is so if the ball is bunted correctly, it is almost sure to go fair. When a bunt is laid down the right way, it is very difficult to defend. The perfect bunt is hit toward third base just past the pitcher. Getting the third baseman to field the bunt is the ideal situation because he will be coming in fast and his momentum will be going toward home plate. He has to stop, field the ball, plant his foot, and throw an accurate throw to first base to get the batter out.

There are many bunting strategies that can be used in a game. My favorite is with less than two outs and a runner on third. In this situation, the batter can bunt to the third baseman and the base runner bounces toward home. When the third baseman releases the ball to first base, the player on third runs home, and must slide. If it is a good bunt, and the base runner breaks to home when he should, this is almost unstoppable.

Another bunting strategy is when you have a fast runner on first base with a good bunter up. The batter will bunt and the base runner at first base will not just run to second but will continue going all the way to third. The theory here is that if the third baseman fields the bunt, he will not be able to get back to third base to field the throw from the catcher. I have used this play a lot and it works well with the right personnel.

Remember that youth baseball players can practice bunting at a very young age. Seek out your high school coach to teach the proper technique. Also, make sure your best bunters get a chance to swing away. 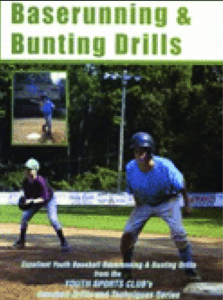