I love and appreciate great coaches in all sports and at all levels. I love to make notes of coaches who think outside the box and take chances. I remember years ago the baseball manager, Billy Martin, put a game under protest because the pitcher took one extra pitch to warm-up between innings. He was probably the only one in the ballpark who was counting. I remember when they first instituted the rule in Major League baseball that forbid pitchers going to their mouth in a game, the penalty being the subsequent pitch would be called a ball. The manager, Leo Durocher, at the time ordered his pitcher to go to his mouth four times when he wanted to intentionally walk a batter. There was a basketball game years ago when Phoenix Suns player, Paul Westphal, called a time out knowing his team had none left to purposely get a technical foul. His team was down by one point with one second on the clock and the illegal time out would grant the opposition a free foul shot, which they made, but it gave Westphal’s team the ball at half court. Instead of his team trying to make a full court length 80 foot shot for the win, they buried an 18 foot shot after getting the ball out at half court to send the game into another overtime period.

In all my years coaching youth sports, I have always tried to be flexible and have an open mind when learning coaching and motivational techniques from other coaches. It doesn’t matter the sport. I am always observing these other coaches and how they speak to their players. I watch football coaches yelling at individual players and make note of how close the coach’s face is to the player’s. I study how youth coaches get down on one knee when they speak to younger players, just to be at the same eye level.The smallest things go the longest way. I learned long ago that when speaking to my players outside, I make sure I am the one facing the sun. If the kids are facing the sun, chances are they will cover their eyes, and maybe half will get the point you are trying to get across. In all my sports instructional videos which are now free at Amazon Prime Video, I always try to put in a few coaching techniques to give the coach a chance to have a smoother season. Here are some other tidbits I’ve learned.

At the beginning of each season I struggle to learn all of my players’ names quickly. For me, it is a little bit of work, but well worth it. Also, I make sure I tell my players that I am not good with names and to be patient if I call someone the wrong name. This is especially true if I have a brother of a former player. As coaches, we must take the time to learn players’ names as soon as possible. And once we learn their names, we must also be familiar with their parents’ names and how they want to be addressed.

A number of years ago I use to give out what I called a Tenth Player Award. The award would have nothing to do with batting averages or pitching performance. The award would be given to the player who exemplified sportsmanship, cheering on their teammates, and helping coaches with the equipment. I was sure to make this trophy the largest one given out to any individual, even if we won the league championship. This worked great! It motivated the players to be good teammates. It also made it easier for the coaches when the players would help with the equipment. If you decide to try this, make sure you are able to give the award to more than one player if there is a tie. I remember one year I had a special team. We won only about half our games but what a great enthusiastic bunch of kids we had on one team. At the end of the season, the assistant coaches and I decided to give all twelve players a Tenth Player Award trophy.

I make sure I say it loud enough so the whole team hears me. A lot of times after I say it, a number of other players will also help with the equipment.

Make sure when you do this, you don’t say, “Whoever helps with the equipment gets an extra swing at batting practice.” You want to be somewhat stingy with the extra swings and only announce it after someone is helping. This adds value to the swings you are giving out and players will help out not knowing if they will get extra swings. This works great. The first thing I ask players during batting practice when they get into the batter’s box is, “How many swings do I owe you?” The player might say seven. I’ll say we’ll use two of those. I put my players on the honor system. This has even carried over from season to season. When we are at our first practice of the year, a young veteran will make sure to tell me, “Coach, you owe me six extra swings from last year.” I make sure to honor those extra swings. When kids are determined to remember something that will benefit them, it stays with them.

As youth coaches, many times we will take some of the personality and techniques from the coaches we had as youngsters and in school. The best advice I can give is to take bits and pieces from other coaches, but you have to develop your own coaching personality. If you end up coaching over along period of time you will learn what works to motivate your players and what works when you want to have a little fun. Just make sure you realize that what might work for one group of kids may not work the following year. Be enthusiastic and be flexible to make changes as a coach! And whatever anyone else may tell you, you are a role model. 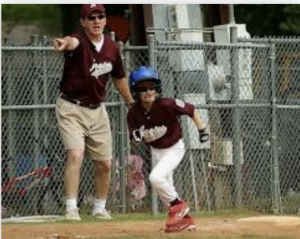