In sports, many times coaches are more negatively affected by bad things that happen than being positively affected by good things that happen. I heard an interview with legendary pro football coach, Bill Parcells, who said that in many cases the tough losses he lived through overshadow the tough wins and championships. I’ve heard the same thing from other professional coaches. With that being said, there are definitely things that drive coaches crazy at all levels. When coaching youth sports we all have to keep repeating to ourselves that these are 10, 11, and 12 year-old kids, or whatever age you are coaching. Some  of the same mistakes happen repeatedly and this inspired me to write a book called 44 Baseball Mistakes & Corrections. Here are five of many things that drive me crazy coaching youth baseball.

I’ve seen young baseball players in the outfield do what I call, throw the ball to nowhere. They’ll retrieve a ball hit to them with one or more baserunners on the move. Everyone is yelling to the player where to throw the ball. Many times you’ll get five different people in the stands yelling to the player to throw it to five different places. Coaches have to teach some kind of structure and discipline with our fielders. We also need to make sure our players know the coach’s voice so they aren’t listening for their uncle from out of town who knows everything. Another mistake made in youth baseball is when a fielder throws the ball to the pitcher from anywhere on the field while the ball is still in play. Suppose a ball is hit to the outfield. The fielder gets the ball and decides to throw it back directly to the pitcher instead of throwing it to the closest infielder. When this happens, the potential for errors and mistakes are magnified. The pitcher may not be ready to catch the ball, or the ball may be overthrown. The baserunner may get one or possibly two extra bases. The outfielder should throw the ball to the closest infielder unless he has to throw it to the lead base. Keeping the throwing target short will help keep the mistakes down.

Similar to the previous mistake is when outfielders hold the baseball too long while trying to decide what to do with it. In fairness to the players, many times on a ball hit to the outfield with players on base, you can have every infielder asking for the ball, as well as coaches and parents in the stands yelling where to throw it. The problem that occurs with an outfielder holding the ball too long is that baserunners will keep advancing. One of the best remedies, besides practicing situational play, is to instruct your players that if they are not sure who to throw the ball, don’t hold it. Throw it to the closest player in the infield with the same color uniform as they have.

There is no reason a baserunner should be safe at a base when the ball gets to the base well ahead of him. Youth players fielding the baseball and tagging a runner that slides will many times tag the player the wrong way. The ball will arrive at the base well ahead of the sliding runner. The player for some reason will tag the runner on the thigh as his feet will hit the base first. He will be called safe. The correct method is for the fielder to keep his glove low. Teaching players to"tag the dirt" should get the out every time when the baseball gets to the base first. Tagging the dirt will make sure the player keeps the glove low. Keeping the glove low means keeping it in front of the base on the ground so that the baserunner has nowhere to slide other than into the glove for an out. Fielders should not reach for the tag but they should watch the player’s feet and adjust the location of the glove so the player slides into it.

4. Baserunner on 3rd Leading Off Base

Baserunners will naturally lead off a base on a fly ball. This is good baseball except when the baserunner is on 3rd base with less than two outs. There is nothing positive that comes from leading off third, when a potential successful tag up will result in a run. Knowing this, players still have a tendency to take a lead unnecessarily. Instead, baserunners should stay on the base and wait for the ball to be caught. Even if the ball is dropped, a runner on third should still have enough time to score from third.  A good technique is for the player to stay on the base and not even look at the flight of the ball. He should stare at home plate. On the catch, the coach will yell ”CATCH” and this signals the player to run. This also takes the responsibility off of the player’s shoulders.

Youth pitchers are eager to begin their pitching when they are in the game, sometimes when their team is not even ready to play. This happens a lot at two points in the game; at the beginning of an inning, and also at the end of a play, when fielders are still out of position. An example of this is the very common foul ball pop up that one or more infielders and an outfielder are pursuing. The ball carries off the field of play, but many times the pitcher begins his pitch when the infielder(s) are not back in position especially not paying enough attention to the outfielder who probably has the most ground to cover to get back to his position. Teach pitchers that the play doesn’t begin until they throw the baseball. Pitchers need to be schooled that at the beginning of an inning or after a play, they should turn around and scan the field to make sure every fielder is in their position.

Making players aware of these and other mistakes will help resolve these mistakes. Better yet, practice these situations so the players learn while doing. Even with all the preparation, mistakes will be made. Limiting them and having less mistakes than the opponent will put your team in a position to be successful. 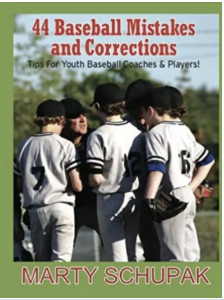