When you see a great point guard in basketball it is a beautiful thing to watch. On a fast break, most have excellent peripheral vision and can see the whole court. On most plays they know exactly when to pass the ball off, giving their team the best percentage of making a basket. Great point guards know what type of pass to make so the receiver of the ball can control it. They know when to whip a fast pass or an alley-oop or a touch pass that cannot be too fast. In most team sports at the professional level it is the same thing. Great quarterbacks know when to throw a bullet pass or a touch pass just as great passers in hockey are experts at knowing how fast to pass the puck to lead an open man. In youth sports, baseball in particular, some youth players have a hard time distinguishing how fast to throw the ball to a base to get an out. In their minds they try to react quickly to get the ball out of their glove and throw it to the base as hard as they can. If you are coach or a parent and observed youth baseball games you probably witnessed more than once infielders throwing the ball too hard on very short throws when, if they take their time and adjust their throw, it will be a sure out. This is a mistake I see year in and year out. As coaches we want our players to make the highest percentage play they can. Here is the scenario. The batter hits a grounder to the second baseman’s left side. His momentum has him moving toward first base. He fields the ball cleanly and as he comes up with the baseball ready to make the throw he is no more than 8-10 feet from the first baseman. Instead of throwing a catchable baseball, he throws it overhand at a speed that is almost impossible for the fielder to catch. The ball goes past the first baseman and instead of getting a sure out, the batter is now standing at second base in scoring position.

Coaches have to practice with their team to toss the ball underhand when they are right on top of the fielder covering the base. When the fielder throws the ball overhand, he has a hard time letting up on the ball in close distances. As I have said many times before, you can tell your players to toss it underhand if they are close to the base, or you can practice it so they at least get a feel for how to do it.”

Here is a drill I set up to teach this, and in fact, two concepts are being taught. I always encourage cross sports drills. If you see a drill in another sport that might work for the sport you are coaching, then use it. For the underhand toss, I start with a drill at second base using a football. The concept of leading the fielder is also taught. I set up two lines, one at shortstop and one at second base. I stand behind the pitcher’s mound and toss a football underhand to the shortstop. Only when he catches the ball can the second baseman break to second. The shortstop then leads the player, tossing the football underhand to the base. I do this for a while, then move on to baseballs. This drill works well. You can also move this drill to second, tossing the ball to first base.

When teaching young players to toss the baseball underhand, some may have a tendency to toss it too high, which will drive coaches crazy. You have to point this out to your team and show them the right way and the wrong way to toss the baseball. The underhand technique should be practiced a few times during the season. Here is a bonus on the underhand toss. When the bases are loaded with two outs, I teach my pitchers to toss the ball underhand to the catcher on a slow grounder that they field in front of the mound if their momentum is going toward home plate. I maintain this is the highest percentage for an out with the shortest distance to throw. Explain, then show your kids how when a pitcher’s momentum is going forward, it is harder to stop, plant your foot, turn to first base, and throw it there. I always maintain the concept that the team that throws the ball around least, increases their chance of winning. And as I emphasize in my video “Fielding Drills & Techniques” the shorter the throws the better chance of making less mistakes. The longer the throws, the better chance of mistakes happening. When your pitcher is one of your better athletes, many times he can run home and beat the baserunner from third base, which is even a higher percentage play. Again you must practice this situation with your pitchers.

Teaching the underhand toss is an excellent concept to expose your players to. Practicing it will give them confidence to do it in a game so an errant overhand toss that was not necessary ends up with a baserunner in scoring position.

Too Many Travel Teams Can Be Detrimental To Kids!

RUNDOWNS CAN BE SURE OUTS! 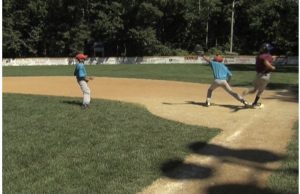 Do you love baseball movies?

Check out our "Baseball Flicks" page with some of the best clips ever.