“I got one last thing, I urge all of you, all of you, to enjoy your life, the precious moments you have. To spend each day with some laughter and some thought, to get your emotions going. To be enthusiastic every day and as Ralph Waldo Emerson said,‘Nothing great could be accomplished without enthusiasm,’ to keep your dreams alive in spite of problems whatever you have. The ability to be able to work hard for your dreams to come true, to become a reality………Don’t give up, don’t ever give up.That’s what I’m going to try to do every minute that I have left.”

Jim Valvano, while coaching at North CarolinaState University pulled off one of the greatest upsets in NCAA basketball history beating the University of Houston. No one gave Valvano’s team any chance of winning the game. His team won 54-52. This game is still considered one of the biggest upsets in sports history! A couple of months after he made his infamous ESPY awards speech, Jim Valvano died of cancer. How does this win versus incredible odds have anything to do with youth sports?

As coaches in youth sports we have all been on both sides of blowout games. And when you are getting blown out, the game can last forever. I remember I was coaching a 10 year-old All Star game and it was the first inning and we were down 9-0 with the other team still batting with the bases loaded and no one out. I remember thinking to myself, “This game is never going to end.” How do we keep our team motivated in games like this? I remember once coaching my daughter’s youth basketball team. We were missing our three best players and were down to five players. Of course we were getting blown out from the opening whistle. In the second half, one of my players got injured with about ten minutes to go in the game. We were losing something like 49-7 and would have to finish the rest of the game with four players. It got worse and worse and was so bad I quit looking at the scoreboard to look at the clock. I asked my assistant to tell me when we were down to five minutes to go in the game and then I called time out. I told the team that for the next five minutes I don’t care about the score but I want to out rebound the other team. We would yell out the rebounding score as the game clock wound down.We were holding our own with just four players. With about a minute to go I called time out and told the team that if we did in fact out rebound the other team I would take them to the local ice cream shop called Cups N’ Cones.They all got excited! The game continued, and lo and behold we out rebounded the other team by two rebounds. The girls went crazy like we had won the league championship! The other team, including their coach, and everyone in the gym had no idea what was going on! The final score was something like 67-10, but you would have never known it!

What works for me in situations like this is to establish small goals once the game is out of hand. In my 10 year-old All Star blow out, I began to divide the games into innings and told the team, “I don’t care what the score of the game is, in this inning I want to out score them.” It seemed to work in this situation. Don’t get me wrong here. Breaking up the game into small goals will not always work, but as coach you have an obligation to keep your team motivated until the last whistle or the last out. Your body language and whispers to your assistant coaches will affect your team.

Another motivational technique is to always have a library in your mind of games or seasons that teams were losing or big underdogs that came back to win. If you are a sports fan like myself you must have lived through a bunch of these. The 1969 New York Jets were 18-point underdogs to the Baltimore Colts in the Super Bowl and they won! In1983 the Buffalo Bills were losing to the Houston Oilers by 32 points and came back to win the game. In 2003 the Indianapolis Colts scored 21 points in the final five minutes of this Monday Night Football spectacular to knock off a stunned Tampa Bay Buccaneers team 38-35.The Colts were losing 28-7 heading into the fourth quarter.

In 2004, the Boston Red Sox overcame 3-0 series deficit to beat New York Yankees in the ALCS en route to the World Series. And how about this one! On August 5, 2001, the Cleveland Indians were losing to the Seattle Mariners 12-0 (and later 14-2) and came back to win the game 15-14! You owe it to your sports team to make them aware of games like these!

And how about outside of baseball and sports? Henry Ford went bankrupt five times before he became successful with the Ford Motor Company. Walt Disney tried to make it as a cartoonist but was told he didn’t have any talent. Thomas Edison’s teachers said he was too stupid to learn anything. J. K.Rowling, the author of Harry Potter, was a single mother, divorced, broke, and depressed. Her first manuscript was rejected by 12 publishers. Within 5years, J. K. Rowling ended up becoming famous, loved, and wealthier than Queen Elizabeth II ! All these are great motivators for your players. Learn some and feed them bits and pieces during the season, but not all at once. Then you can say,“Remember Thomas Edison.” Or “remember Henry Ford.” Remember the 2001 Cleveland Indians come back from 12-0.

If you say it and repeat it during the season, your team will never quit. From day one, I always tell my team there is going to be at least one game during the season that we will be getting beat bad, but we will come back to win the game. I emphasize we don’t know which game it will be, but it is out there. And every year it usually is! 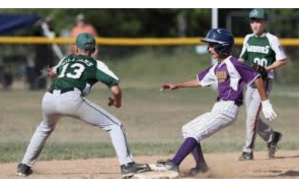 Things That Drive Me Crazy In Youth Baseball