The short story I’m about to tell really has nothing to do with interference but it has something to do with not knowing the rules. A number of years ago my team was in the playoffs. We were involved in a real close one run game. Very late in the game, we had a runner on third and one out. My batter attempted to bunt on the first two pitches and missed so he was down 0-2. I decided to take a chance like I’ve done before and gave the batter the bunt sign with two strikes. Not a popular decision in baseball 101. The pitcher pitched the ball and my batter got into the “square bunt” position as opposed to the “pivot bunt.” He laid down the most beautiful bunt down the third base line that hugged the foul line in fair territory and died at the perfect spot. For a second I felt like a genius knowing the runner from third would score and we’d have another baserunner. To my chagrin, before I had time to pat myself on the back, the home plate umpire called my batter out. Apparently he stepped on home plate with his right foot while he squared to bunt and the ball made contact with the bat. I was stunned and tried to give a convincing argument but it remained an out and we ended up being eliminated from the playoffs. Now this story has nothing to do with “interference” but even for 10, 11 and 12 year old kids, if I took 5 minutes sometime during the season and explained about stepping on home plate, maybe we would have went further in the playoffs. You can bet your bottom dollar that every year since I explain to my team about bunting and making contact with your foot and home plate.

In baseball, interference occurs in situations in which a person illegally changes the course of play. Interference can be committed by various ways. There can be interference by players on the offense, players not currently in the game, catchers, umpires, and even spectators. Each type of interference is covered differently by the rules. So you can see there are a few types of interference but I would like to keep it simple for now describing only one and what I consider the most common type of interference in youth baseball and softball that come up every year.  I have to confess that it took me a couple of years before I really learned the difference between Interference and Obstruction. Since I learned the difference, I have seen coaches and/or parents yell from the dugout or stands “interference” when it is “obstruction” and “obstruction” when it is “interference.” I have been burned as a coach by both interference and obstruction so now each and every year we go over both in practice teaching our players the difference. It is in the best interest for your team to go over each of these terms. And as teachers, it is always much better to show your players than it is to just tell them. You can teach this by age group. The really young kids might not all grasp it but when you are coaching 10,11 and 12 year olds, explain and set up different situations to show them.

The most common type of Interference usually refers to an act by the offensive team that impacts the defense making a play. So think in terms of a baserunner running from second to third, bumping the shortstop as the ball is coming to him. Obstruction refers to a fielder who hinders a runner.  Quite simply, Interference is a ‘penalty’ against the offense, and Obstruction is a penalty against the defense.

So we coaches must spend time teaching how our baserunners should avoid a collision with a fielder. If a collision is imminent, it is up to the baserunner to stop or run around the fielder while remaining in the baseline.

As coaches, don’t get too obsessed with this but I usually spend 10-15 minutes in one practice going over “interference” situations on all the base paths. Spending this time going over it and reinforcing the concept throughout the season may save you a run or even a playoff game. 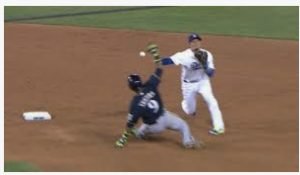