I have made it no secret that I have a huge affinity toward catchers in youth baseball. A catcher who is11 or 12 years old is great to watch. Some really good ones play beyond their years. With that said, the third baseman in youth baseball may be the most important position on the field. This might seem incredible to some youth coaches who will sometimes hide weak players at third base, especially if they have their best right handed pitcher on the mound.

It’s funny that if you are in a gambling casino playing Black Jack, the player who is situated right before the dealer is called “third base” and card players pay close attention to what he does, thinking that each and every move he makes affects every one else, when in reality his moves are just magnified because he is the player before the dealer.

Third base in baseball is also known as the hot corner. Being close to the batter, the third baseman must have a quick reaction and must have above average hand-eye coordination. Interestingly, in the Baseball Hall of Fame, there are fewer third baseman than any other position. In youth baseball, I like one of my best fielders to play third in most situations. I want to know that if there is a hard hit grounder or a good bunt that my third baseman will almost always get the out.

On my baseball teams I am constantly doing different drills. We practice many of our infield drills from third base. I do this for a number of reasons, but mostly because it is the longest infield throw. The more repetitions a player gets from third base the more muscle memory he will develop. I know that if my players can make accurate throws from third base, then they will be able to do it from any other position. One hint for coaches is that at the beginning of the season I encourage my younger players to try making accurate throws to first base, even it reaches first on one or more bounce from third.

I teach all my infielders that if they keep the ball in front of them, they don’t have to catch a ground ball cleanly. They can still get the out. Even at third base, the fielder can make the play and get the out on a ball not fielded cleanly. We actually practice this with a drill called the “Bobble Drill.” When a grounder is hit, the player will field the ball, drop it on purpose, pick it up, and still make the play. We do this drill at third base. We have to remind our third baseman in a close game that in the late innings we want him close to the base. We don’t want him to allow a grounder to get through inside the base and go for an extra base hit. When, and if this happens, it is a killer. In my book, Baseball Coaching:A Guide For The Youth Coach And Parent I bring out a stat that between 55-65% of balls hit in youth baseball are to the infield.

Fielding the bunt is one of the main reasons I want my third baseman to be my best fielder. As soon as the batter gets into the bunting position, I want my third baseman sprinting in toward home, knowing that if the ball is laid down fair, he is the one I want to field the ball. He must be able to field the bunt smoothly and position himself to make an accurate throw to first base. How many times do we see a third baseman field a bunt perfectly only to throw the ball past the first baseman down the right field line? An almost sure out is then turned into a possible three base error. Coaches must have their third baseman practice fielding the bunt and making the most awkward off-balance throws to first base.

One can’t help but remember the 2009 World Series when the Yankees were playing the Phillies.Johnny Damon stole two bases on one pitch, getting to third base because it was unattended. I have never seen anything quite like it, Johnny Damon, racing the baseball to second base in the ninth inning of a tied World Series game. He then picked himself up and went all the way to third, as a stunned ballpark sat there with their mouths opened. This helped theYankees win the game and the Series just because third base was unattended by a fielder.

Fellow coaches might take exception to my emphasis on a good third baseman. They will argue that with a really fast pitcher, and with most batters being right handed, why waste a good fielder at third when most of the baseballs will be hit to the right side of the field? This may be true, but when I coach in All Stars I always notice that the best fielders on the team are not the catchers or shortstops but the third baseman. Each and every one of the nine defensive positions are important. Third basemen must have a combination of toughness, grit, reflexes, and a lot of baseball IQ. Coaches should consider the importance of this position and field their team accordingly. 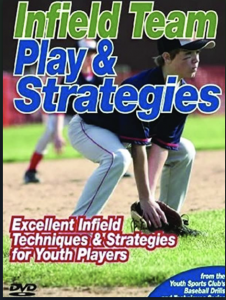 View the #1 Infield Video In The World With Secrets Revealed

Follow Marty Schupak at Twitter for the latest news, tips and techniques! From T-Ball to that full athletic scholarship!