Right now we are seeing some positive signs that the Covid pandemic may be finally flattening. After this past year it’s only natural that parents and children are now anxious to get out of their homes and back to their old lives.  Often this means getting their kids involved in as many activities as they were before. However, before that happens they should take a moment and consider what we should have learned over the past year. It’s not very often that life gives us a do over!

Parents think nothing of signing their kids up for multiple travel baseball teams. I’ve seen travel baseball teams with kids as young as 8 years old and have heard stories that this goes on even at the tee ball level. Growing up as a baby boomer in the 1960’s I was on only one youth baseball team, our local Little League, and that one team was quite enough. But times have changed.

In support of Travel baseball, parents have been logging extra miles on their leased cars, eating too much fast food and working their washer and dryer like a marathon runner in training. There is nothing inherently wrong with travel baseball but parents now sign up their kids for multiple teams. Parents, educators and medical people have to pause and ask, ‘how much is too much‘ and ‘what are the true motivations for signing up a youngster for multiple teams’? Is it to play with better competition? Or Are parents living vicariously through their kids? Do they truly expect to get a scholarship to college?  These are some of the catalysts for this frenzy which has now been going on for over two decades. And it is not just baseball but almost all of the other youth sports are into the travel team culture. But when it comes to signing up for too many leagues in the same sport I would say that baseball is the biggest culprit. It may be because baseball was the first to start travel sports.

For years the local Little League organization was the only venue where kids played baseball before playing on their school team. Then in the late 1990’s travel ball came about. It has since mushroomed creating numerous sub cultures such as travel tournaments, showcase tournaments and showcase days. What then developed were highly skilled players or their parents who felt that participation on multiple teams was needed to stay competitive. I’ve seen players involved with Little League and three travel teams at the same time. This can be self defeating psychologically resulting in burnout.

According to Dr. Peter Fabricant, a pediatric orthopedic surgeon at the Hospital for Special Surgery in New York City, “We see kids as young as 10 years old playing on four teams in the same sport. The problem is that playing the same sport intensively all year round puts young athletes at higher risk of overuse injuries.”

And from the Pediatric department at the same hospital (Special Surgery) they state:

“According to the National Council of Youth Sports 60 million children from ages 6-18 participate in organized sports each year. Of those, 27 percent are involved in only one sport.”

And within baseball, pitching is the biggest offender/problem when it comes to injuries. When a pitcher is on multiple teams, there are times during the season when one or more of his coaches will try to get an extra 10-15 pitches from him. Even though he is over his limit, the coach does not think twice about any long term negative effects. This is 100% wrong to put winning over the health of a player.

I concur with the above that playing the same sport for twelve months a year is not a good idea. The American Sports Medicine Institute recommends young players take at least 2 months off from throwing a ball. I would say it should be more like 3 or 4 months. For the development of kids, I love the idea of  limiting the number of travel teams and parents should also have them play a second sport. If a youngster plays a lot of baseball, soccer or track is a great compliment to baseball  because it uses a different part of their body.

This what I recommend to parents who have talented kids with excellent baseball ability:

1.Keep them in their local recreational or Little League as long as you can.

2.Don’t get involved in travel leagues until the player is twelve years old.

3. Only sign up for one travel team and make sure there are no more than 2-3 games per week.

4. Find out the coaches background. Why is he coaching the travel team? For his son? For money? Either reason is actually fine, but investigate.

5. Ask the coach how many days a week they practice. Stay away from teams that just play games and don’t practice. Practice is teaching, learning, socialization and developmental time.

6. Be wary of newly formed travel teams. Usually they are spin offs from another team where the parent decides to form one out of self interest for one reason or another.

7. If your child is on multiple teams and pitches, it is up to you, as a parent to keep track of the number of pitches your son throws. Don’t trust the coaches. They will rationalize getting extra pitches from your son when they already reached their pitch count limit for the week.

8. Kids should take anywhere from 2-4 months off away from baseball after playing for 10 or 12 months straight.

9. Diversify and have them play another sport.  A great compliment to baseball is soccer or track because they are using another part of their body.

10. Sign them up for travel baseball for the right reason. They should love the game.

If you have a very talented athlete and want to give him the opportunity to excel, I always remember the story the late great baseball manager Sparky Anderson told. He was speaking at a clinic and at the question and answer period, a visibly upset woman asked.

“I’m a single mom working two jobs. Everyone tells me my son can be a top prospect and I need to do more with travel teams and showcases. I just can’t afford it.”

Sparky looked at her and said softly,” Ma’am, don’t worry about all them teams, showcases, coaches and everything. If your son is talented, you can lock him up in his room until he is eighteen years old. We’ll find him.

As parents, we want our kids to have the best opportunity available. Give them that chance but don’t overdo it. The most well rounded kids usually become excellent citizens, successful in their careers and great family people. Isn’t that’s what is important and what we all want?

Marty Schupak has coached baseball and youth sports for 25 years. He has written 12 books on coaching and created 26 instructional videos including the popular “59 Minute Baseball Practice.” He is the founder and President of T-Ball America and can be reached at: www.TBallAmerica.com.

Getting Kids To Practice On Time 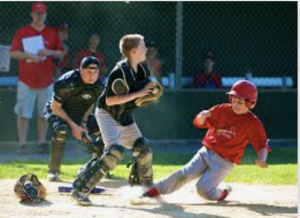