I have been fortunate to have known a lot of coaches in all sports. I was attending a high school playoff basketball game that was going down to the wire. The coach I knew, his team was down by one point at the end of the game. With a few seconds left, one of the guards got some space and drove all the way down the left side of the basket and put in a lay-up with his right hand just out of the reach of two defenders. The team won the game. Later that week I ran into the coach and congratulated him on the team’s great victory. I couldn’t help asking him why the guard didn’t take the  lay-up lefty since he was on the left side. The coach explained that the guard who was a righty was most comfortable with his strong hand. He went into detail that he teaches his team the correct fundamentals, with lefty and righty lay-ups but to always shoot with the hand that will make the basket. This conversation stuck with me.

In baseball, each and every fielding play in baseball is slightly different from the one before. I know some people will vehemently disagree with me but I don’t recommend trying to catch every ball with two hands. I would say in almost every book on baseball fundamentals you will read will state that you have to teach kids to catch everything with two hands. I think this is 100% wrong. As a coach, I want my players to catch a ball anyway they can. I want them to practice catching a ball with two hands. I also want them practicing catching a ball with one hand. Let me explain my reasoning on this. Before I give you my explanation I want to urge all new youth coaches to use soft covered balls to start when teaching fielding fundamentals. In my first video, The 59 Minute Baseball Practice, I encourage using props and  I’m a huge believer in this. Using different size balls or even scatch balls with a velcro paddle and velcro ball to help kids gain confidence catching a baseball is an excellent technique. The worst thing we can do for young players is to throw a hard ball at them at their first practice and they get hit in the face or nose and never want to step on the baseball field again. We want to instill confidence in young players so they keep coming back every year to play. Back to one-handed and two-handed catches. Most of the time in baseball and youth baseball a ball could and should be caught with two hands. There are times though when it is easier for a player to catch the baseball with one hand rather than both hands. When catching a pop-up hit right to a player, with little or no running, a two-handed catch works best. But too many coaches and parents overemphasize catching everything with two hands. The simple fact is there are a lot of baseballs that are not hit right at a player. He may have to move multiple steps to his right or his left. Imagine a short stop sprinting fast into foul territory behind third base trying to catch a foul ball. And the only way he can make the play is if he stretches out his glove arm toward the baseball that is descending toward the ground very fast. I maintain that on a play like this it is virtually impossible for the fielder to make the play if he has to do so with two hands. Coaches must be flexible the way they teach the game of baseball. And they should instill onto their players to be flexible. As a coach I urge all other coaches and parents to teach their kids to catch with both two hands and with one hand. This is for ground balls as well as fly balls. A good rule is that two hands should be used in most cases when your body is completely behind the ball. But when a player is moving fairly quickly it will probably be easier for him to catch the ball with one hand. The bottom line is to teach the correct fundamentals with one and two handed catches but teach players to catch the baseball anyway they can. And very important for Little League coaches is not to berate kids if they use one hand and make the catch. 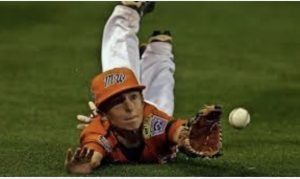